The assault mobile suit that fought intense battles in the colony has been made into a kit in the MG series. The legs, forearms, and backpack are detachable. It is elaborately built up to the mechanics of the internal mechanism. The special weapon "Chain Mine" prepared to counter "Gundam NT-1" can also take action just like in the play by incorporating a lead wire. Equipped with two each of Giant Bazooka, Sturm Faust, Shotgun, and Beam Saber that can be attached to the back.

I vary much enjoyed this build and the service from MW is top notch.

Loved this kit, first MG I’ve done. It had screws for some of the joints which I had never seen on a Gunpla set yet, fun and challenging build. 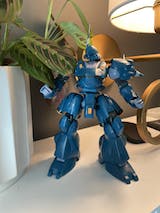 Kampfer is a really good kit. It suffers from janky build order, screwed in parts, limited articulation, and no undergated parts, but that was the standard for kits of its time. That said, it looks incredible and is a great canvas for customization. If you like unique looking zeon suits, grab yourself this MG while it's around.

J
Justin
Definitely due for a 2.0

Okay, so for starters, let me clarify that I love this kit for its aesthetic, but in all honesty, as much as I hate to say it, he did not age well.

As others have suggested, he’s easy to build, which means he’s not as intricately designed or as well thought out as newer models. And I understand that’s due to changes in technology and technique, but it unfortunately means the build isn’t as satisfying.

He’s not like any other kit I’ve built before. Among his knees, elbows, shoulders, and waist, he takes 9 screws to stay together. The boosters just above his ankles feel like they were designed as an afterthought, attached by a triangular piece that doesn’t fit all the way onto the peg it was designed for. The body panels on the torso creak and never look or feel secure when installed (though they won’t spontaneously fall off). Articulation is limited in the wrists due to the stationary angle of the cuff, which makes holding his accessories a pain at times.

But he’s beautiful. He was the first kit I ever devoted a lot of time to customizing, polishing his body panels until they were glossy, shimmering like a brand new car. And ten years after buying my first Kämpfer, I’ve bought a second one seeking to improve upon the first. And as it turns out, there’s a large number of metal part kits dedicated to upscaling the Kämpfer: spikes, mono eyes, rivets, and verniers, even one kit that comes with a metal cable chain to replace the fabric tube that runs across his waist.

Overall, he’s probably not worthy of being a Master Grade by today’s standards, but he’s a handsome figure when complete. The fact that there are options to upgrade the kit means that regardless the structural quality, you have the potential to make from him whatever you want.

It was a eazy kit to put together for it being over 20 years old. I like it but you can tell how much Gunpla has changed in 20 years

Returns
Our policy lasts 30 days. If 30 days have gone by since your purchase, unfortunately we may not be able to offer you a refund or exchange.

To be eligible for a return, your item must be unused and in the same condition that you received it. It must also be in the original packaging.

Several types of goods are exempt from being returned. Perishable goods such as food, flowers, newspapers or magazines cannot be returned. We also do not accept products that are intimate or sanitary goods, hazardous materials, or flammable liquids or gases.

To complete your return, we require a receipt or proof of purchase.
Please do not send your purchase back to the manufacturer.

There are certain situations where only partial refunds are granted (if applicable)
- Book with obvious signs of use
- CD, DVD, VHS tape, software, video game, cassette tape, or vinyl record that has been opened
- Any item not in its original condition, is damaged or missing parts for reasons not due to our error
- Any item that is returned more than 30 days after delivery

Refunds (if applicable)
Once your return is received and inspected, we will send you an email to notify you that we have received your returned item. We will also notify you of the approval or rejection of your refund.
If you are approved, then your refund will be processed, and a credit will automatically be applied to your credit card or original method of payment.  Please note: refunds may be subject to a 5% cancellation/restocking fee to cover the costs of the credit card transaction. When a refund is subject to such a fee, we will offer you the option to receive the refund as store credit in the form of a Mecha Warehouse gift card for the full value of the refund. Fees will be waived in cases of defective products, lost shipments, damage sustained during shipping, or mistakes made by Mecha Warehouse.

Late or missing refunds (if applicable)
If you haven’t received a refund yet, first check your bank account again.
Then contact your credit card company, it may take some time before your refund is officially posted.
Next contact your bank. There is often some processing time before a refund is posted.
If you’ve done all of this and you still have not received your refund yet, please contact us at support@mechawarehouse.com.

Exchanges (if applicable)
We only replace items if they are defective or damaged. If you need to exchange it for the same item, send us an email at support@mechawarehouse.com and send your item to: 38 Locke Rd, Unit 4, Concord, NH 03301.

Gifts
If the item was marked as a gift when purchased and shipped directly to you, you’ll receive a gift credit for the value of your return. Once the returned item is received, a gift certificate will be mailed to you.

If the item wasn’t marked as a gift when purchased, or the gift giver had the order shipped to themselves to give to you later, we will send a refund to the gift giver and he will find out about your return.

Shipping
To return your product, you should mail your product to: 38 Locke Rd, Unit 4, Concord, NH 03301, United States

You will be responsible for paying for your own shipping costs for returning your item. Shipping costs are non-refundable. If you receive a refund, the cost of return shipping will be deducted from your refund (unless said refund is the result of a mistake made by Mecha Warehouse).

Depending on where you live, the time it may take for your exchanged product to reach you, may vary.

If you are shipping an item over $75, you should consider using a trackable shipping service or purchasing shipping insurance. We don’t guarantee that we will receive your returned item.