This modern version of the Nu Gundam has been designed by esteemed mechanical designer Hajime Katoki as part of the G-Dome at the Gundam Front Tokyo exhibit. Featuring new modeling technology refined since the original MG Nu Gundam release, this Ver. Ka incorporates new gimmics such as foldable tabs on weapons to allow for better gripping and a head with light up eyes using an LED (sold separately). Hands on this release feature a new refined articulated finger system used on the larger scale Perfect Grade series allowing expressive hand and individual finger movement. This release includes all of Nu Gundam's weapons including large and small beam saber, beam rifle, hyper bazooka, weapon shield, and 6 fully deployable Fin Funnels. A custom stand in the shape of Amuro's insignia is included as well as holders to display the fin funnels deployed. Runner x25, water decals x1, instruction manual

Such a great build experience. Very detailed, and no unsightly nub marks without even needed to send them. And, as always, Mecha Warehouse has the best prices around.

This was the first large MG I tried my hand at. I have built the RG Nu Gundam, but I've heard good things about this suit so I wanted to take a whack at this one too. Credit to the MechaWarehouse team for getting this shipped in good condition and in a timely manner during a busy week.

Overall, the build process is very straightforward. Just take your time and don't rush yourself - I am busy with work, so I spaced this out over the course of two weeks. The only area I had to really follow closely was with the hands. Even after assembly I still feel afraid to manipulate them too much. Newer MGs with those kinds of hands seem to have improved them, but this was the first MG with these kinds of hands, so it is to be expected.

The color correcting stickers can be hard to apply, but they secure well and look better than I thought. As long as you don't damage the sticker itself, honestly it doesn't look like a sticker - these are miles better than the more ridiculed lower quality versions from HG models. But you can of course choose to skip and paint it yourself if you want. . The foil backing stickers for the psychoframe parts are hard to apply, but they really make sure the psychoframe pops nicely when light hits it. I suppose if you are not interested in having the psychoframe part exposed, you can skip that part.

And on that note - the psychoframe. It's a great touch to the suit in my opinion. If it's not to your liking however, it's pretty easy to close up. Unlike the Unicorns, it's not really noticeable when it's closed since there's not a lot of it to begin with, so you can keep it in that state without it peeking out too much. Find the form you like and keep it in that state.

Once assembled, the suit is pretty sturdy, but it becomes more of a challenge once you add the rocket launcher and the fin funnels. The latter in particular seem to be notorious with how stable they are and people have shared their own versions on how to mount them and keep them secure. The only real way to pose this with the funnels in their default asymmetrical form in my experience is to pose it before attaching the funnels and reattach them once you have the pose you want. I used a matte topcoat on mine which helped a little in tightening the connection. Even then you might still have some difficulty, so keep your cool.

There are also parts to build another fin funnel rack - this can be used for the double fin funnel set, or as I've seen others do it, to make a symmetrical layout with 3 fin funnels on both sides. The latter I suppose is another option you can try if the asymmetrical form gives you trouble.

I feel the wrists are a bit loose, and sometimes especially when they are holding a weapon it can droop a bit. Looking at the way the hand secures itself to the arm, it is kind of flimsy, and while it gives a better range of motion, the trade off is that it will weigh it down a bit.

The included stand is a nice touch. I went ahead and repainted it to red to better match the classic Amuro symbol. This is a good way to give the model more self presence, have the option of the funnels in action, or even use them to support the funnels in their asymmetrical look. And obviously take pressure off the legs to keep up the whole assembled form if you choose to keep everything mounted.

Overall, a beautiful model. I still prefer the RG for stability and posing, but for looks and shelf presence I'd say this one wins the prize. 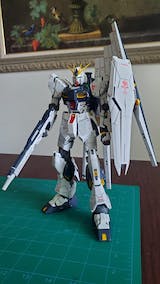 Received my order fast and in pristine condition. Thanks to the MechaWarehouse team!

Very well packaged, no damage at all. The Mecha Warehouse packing tape and included logo sticker were a really nice touch. The Gundam box itself was in perfect new condition. As for the Gundam itself, there's dozens of reviews online that all say the same thing: it's amazing. Not exactly a beginner's build, but can still be done.

Its hard to say anything about this kit that hasn't been said before. Its a fun build with good accessories and great detail. The color separation OOB is good, screams for a bit of panel lining to make the majority white armor pop, but damn do I love that fin funnel wing. Also as per usual MW was quick to ship and everything arrived as expected and faster then I could ever imagine

Returns
Our policy lasts 30 days. If 30 days have gone by since your purchase, unfortunately we may not be able to offer you a refund or exchange.

To be eligible for a return, your item must be unused and in the same condition that you received it. It must also be in the original packaging.

Several types of goods are exempt from being returned. Perishable goods such as food, flowers, newspapers or magazines cannot be returned. We also do not accept products that are intimate or sanitary goods, hazardous materials, or flammable liquids or gases.

To complete your return, we require a receipt or proof of purchase.
Please do not send your purchase back to the manufacturer.

There are certain situations where only partial refunds are granted (if applicable)
- Book with obvious signs of use
- CD, DVD, VHS tape, software, video game, cassette tape, or vinyl record that has been opened
- Any item not in its original condition, is damaged or missing parts for reasons not due to our error
- Any item that is returned more than 30 days after delivery

Refunds (if applicable)
Once your return is received and inspected, we will send you an email to notify you that we have received your returned item. We will also notify you of the approval or rejection of your refund.
If you are approved, then your refund will be processed, and a credit will automatically be applied to your credit card or original method of payment.  Please note: refunds may be subject to a 5% cancellation/restocking fee to cover the costs of the credit card transaction. When a refund is subject to such a fee, we will offer you the option to receive the refund as store credit in the form of a Mecha Warehouse gift card for the full value of the refund. Fees will be waived in cases of defective products, lost shipments, damage sustained during shipping, or mistakes made by Mecha Warehouse.

Late or missing refunds (if applicable)
If you haven’t received a refund yet, first check your bank account again.
Then contact your credit card company, it may take some time before your refund is officially posted.
Next contact your bank. There is often some processing time before a refund is posted.
If you’ve done all of this and you still have not received your refund yet, please contact us at support@mechawarehouse.com.

Exchanges (if applicable)
We only replace items if they are defective or damaged. If you need to exchange it for the same item, send us an email at support@mechawarehouse.com and send your item to: 38 Locke Rd, Unit 4, Concord, NH 03301.

Gifts
If the item was marked as a gift when purchased and shipped directly to you, you’ll receive a gift credit for the value of your return. Once the returned item is received, a gift certificate will be mailed to you.

If the item wasn’t marked as a gift when purchased, or the gift giver had the order shipped to themselves to give to you later, we will send a refund to the gift giver and he will find out about your return.

Shipping
To return your product, you should mail your product to: 38 Locke Rd, Unit 4, Concord, NH 03301, United States

You will be responsible for paying for your own shipping costs for returning your item. Shipping costs are non-refundable. If you receive a refund, the cost of return shipping will be deducted from your refund (unless said refund is the result of a mistake made by Mecha Warehouse).

Depending on where you live, the time it may take for your exchanged product to reach you, may vary.

If you are shipping an item over $75, you should consider using a trackable shipping service or purchasing shipping insurance. We don’t guarantee that we will receive your returned item.