■From "Mobile Suit Gundam THE ORIGIN", THE ORIGIN version of "RX-78-02 Gundam" appears!
■ A translucent movable model that exceeds the limits of the range of motion, including a waist that moves boldly forward and backward and left and right, and an ankle that combines high grounding and a dynamic pose with a new interpretation!
■Clear effect parts are attached to some of the new peculiar weapons such as chest vulcan and a powerful display is possible! Various weapons such as shoulder cannon are also included, and the light emission of the camera eye can be reproduced with the optional LED unit!
Molded product × 14, foil seal × 1, Tetoron seal × 1, dry decal × 1, assembly instruction × 1

Pairs well with the Waterslide Decal Sheet from Delpi Decal.

INCREDIBLY flexible, tons of poseability, and a BUNCH of weapons (two rifles, a bazooka, two beam sabers and a shoulder cannon. A minigun and smaller cannon built into the chest, and both wrists have built in guns). These hands are a dumpster fire, but they're really, really poseable. Each finger has 3 joints and are all wholly separate, but they don't want to stay in the palm for me. The head and neck have places to fit an LED, similar to a lot of the PG models. The minigun and smaller shoulder cannon have translucent pieces that can fit into them to mock up firing, which is also cool. The chest doesn't have a Core Fighter, so everything is wildly flexible. I will not be showing this in my pictures because I have big sausage fingers and its rocket launcher has fallen of twice now. 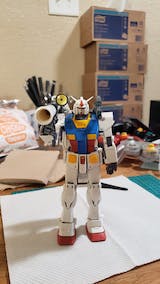 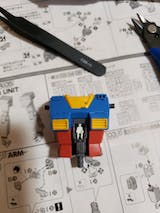 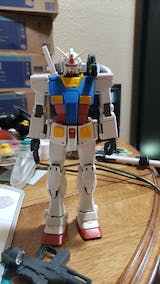 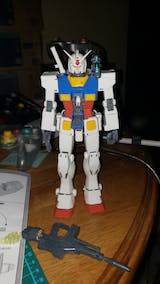